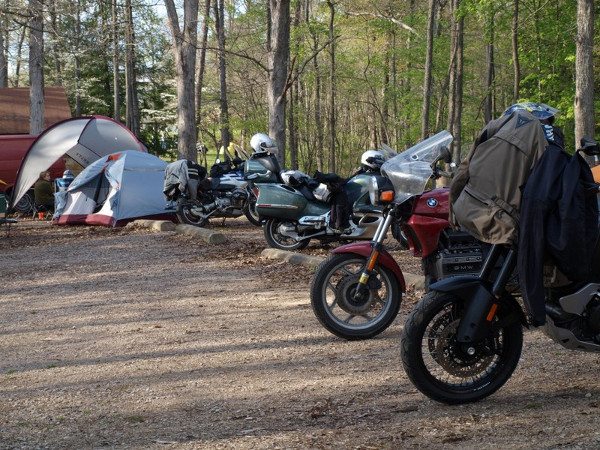 Dual-sport riding got its start in the 1980s as a recreational offshoot of American Motorcyclist Association (AMA) enduro racing competition. Enduros, which have a rich history in the Ohio region, are a timed rally where the objective is to maintain a specific average speed– usually 24 MPH. They are scored by having checkpoints along the route with points deducted for being early or late. The course, which is marked with cardboard arrows on trees, is typically difficult single-track off-road trails connected by dirt and some paved roads. Serious dirt bikes, with mufflers, lights and license plates, have been the enduro bikes of choice since the 1960s.

Not all the entrants wanted to race– many riders entered enduros simply for the opportunity to ride great trails, many of which were located on private property and normally off-limits. As riders got older, many wanted less demanding routes, keeping the fun stuff and bypassing the “hero” sections- basically an easier, un-scored enduro.

The AMA started offering a national series of “Dual-Sport” riding events in the mid 1980s, the name referring to the mix of both on and off-road riding. Nearly all dual-sport bikes at that time were lightweight enduro-style bikes of 250-400cc. The series continues today with sixteen two-day events around the country ranging from 200-500 miles in length for 2018.

In 1980, BMW introduced their approach to the off-road/road concept with the R80G/S (Gelande Sport) model. The 800cc opposed twin with shaft drive seemed outlandish to enduro and dual-sport riders at the time. BMW entered GS bikes in the Paris-Dakar rally, did fairly well with them, winning the bike class in 1981, and 83-85.

Even with that success, riding big bikes off road took a long time to catch on. I remember in 1993 when four BMW R100GS riders showed up at the Land Between the Lakes AMA Dual-Sport ride in Kentucky. Having ridden the difficult event several times, I could not see them finishing. Sure enough, I passed two of them on a muddy hill about fifteen miles out on the first day- they were sitting in the middle of the trail with their wheels sunk in the mud and their cylinders flat on the ground. A small army of riders pulled them out and got them to the road. By lunch time they had all dropped out.

Fast forward to 2004 when the TV series Long Way Round aired, featuring Ewan McGregor and Charley Boorman riding BMW R1200GS bikes literally around the world. They caught the imagination of many and made “Adventure Riding” into a big thing.

Dual-Sport Riding is typically done on lighter, more capable dirt bikes. It frequently includes single-track trail, difficult climbs and descents, large rocks, sand, deep water crossings etc. Dual-sport riding is most often done in loops, starting and ending at the same point in a single day. The main reason for this is that lighter bikes are not well-suited for carrying camping gear, luggage etc, needed for multi-day rides.

A typical dual-sport bike is the Suzuki DRZ400. It has a 400cc, 39 hp engine, about 12 inches suspension of travel and weighs about 320 pounds. Introduced in 2000, it is still in production and remains very popular today.

What does a dual-sport bike have to do with sport-touring?

Everything! Riding a light, responsive bike on the winding back roads of a rural mountain area is a special thrill. Sophisticated, long travel suspension provides comfort and control, especially on roads with lumpy or broken pavement. Even better is that when the road turns to dirt or gravel, you don’t have to turn around. You just keep going, opening another whole world of fun and exploration.

Adventure Riding is usually done on bikes of 650cc and above, and when riding big adventure bikes such as the BMW R1200Gs or KTM 1090 Adventure R, most riders prefer dirt and gravel roads, avoiding most single-track trails. Why would you want to handicap yourself with a bigger heavier bike?

Adventure bikes are much better for multi-day trips- they are more comfortable, able to maintain highway speeds with ease, carry all the luggage you need for a trip, etc. Today there are road/trail systems that have been developed for those who want to travel the country on dirt and gravel roads. Best known is the Trans America Trail (TAT)- ten states and 4200 miles of mostly dirt and gravel roads from coast to coast. There is also the Maine Adventure Trail from Tennessee to Maine, Kentucky Adventure Trail, etc.

There is considerable overlap between dual-sport and adventure riding and the bikes themselves. For example, on the TAT, there are both lengthy paved sections that would be tedious on a smaller bike and scattered sections of mud, steep grades, rocks and sand that are an extreme challenge for bigger bikes.

Likewise, there are bikes that overlap Dual-Sport and Adventure capabilities, such as the Husqvarna 701 enduro with 700cc, 67 hp and 340 pounds, and the Triumph Tiger 800 XC with 800cc, 94hp and 470 pounds. These bikes can be ridden in very rough terrain yet be comfortable and haul luggage long distances on the highway.

Some are surprised to find that the BMW R1200GS is not only one of the most popular big adventure bikes, but a very popular sport-touring bike as well. There are a number of reasons for this. Current models have about 125 horsepower, plenty for a sport-touring bike. Curb weight is low for a road bike- 525-550 pounds depending how it’s equipped. Suspension has long travel and very sophisticated damping, offering excellent handling, control and comfort.

Handlebars are wide with an easy reach, enabling a comfortable upright riding position. There is an adjustable windshield and many accessories to provide whatever one desires for wind protection and comfort. The result is a very responsive bike for the twisties plus solid comfort for grinding out the miles on highways.

The Suzuki 650 V-Strom is another example- it’s a sport-touring bike that a lot of riders like to use as an Adventure bike. It has two full-sized headlights, a decent fairing and windshield, good fuel capacity, and more. Add a skid plate and change the tires and you get a road bike that is light and has enough suspension to be used quite effectively as an Adventure bike.

All The Gear All The Time – ATGATT!

I recommend full riding gear at all times, but for adventure and especially dual-sport riding, it’s even more important. A full-face helmet (can be a dirt-bike style that permits use of goggles if you like), rugged pants with knee and hip pads, and a jacket with armor in elbows, shoulders and back should be considered the minimum.

What about boots? They deserve special attention. When riding off road, your feet are in much more danger from rocks, tree stumps and other hazards. Don’t settle for anything less than an MX or adventure boot that’s at least 12 inches tall and fully armored with reinforced ankles. Boots are not the place to save a few dollars!

If you’d like to try an easy adventure ride for your yourself, be sure to join us at the MSTA Fly-By Week in Marietta, Ohio, August 20-26. We have a brand-new adventure route suitable for both dual-sport and adventure bikes- 160 miles of fun on dirt and gravel roads in southeast Ohio. 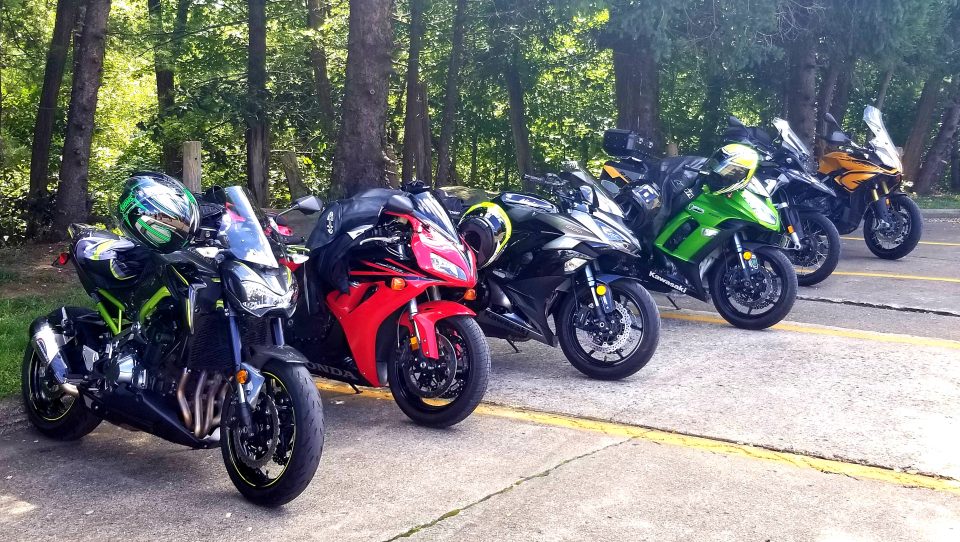 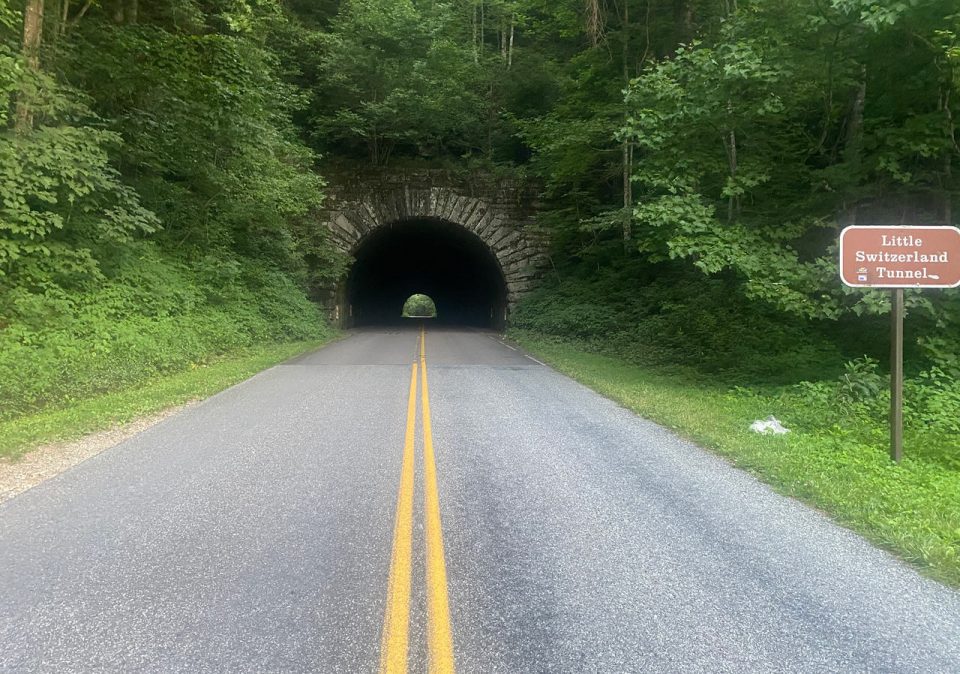