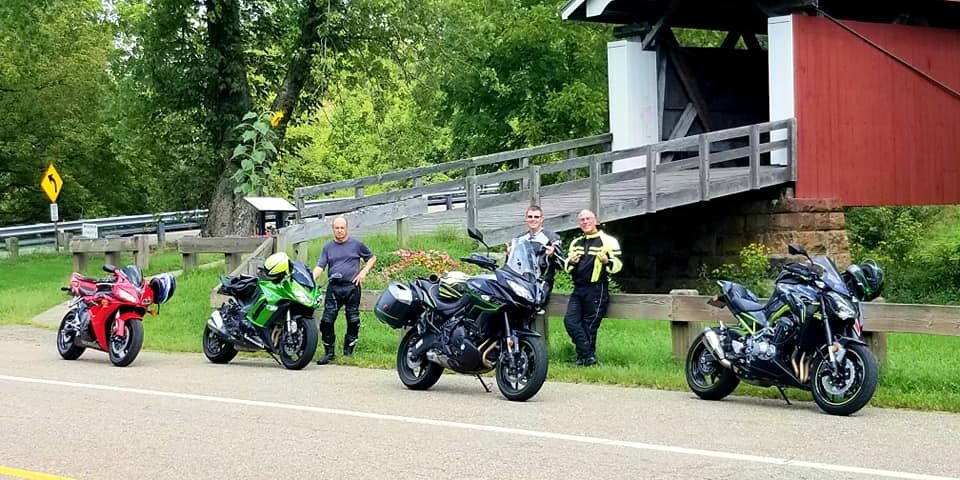 2021 has been a good riding season for me- attended a dozen sport touring rallies with over sixty travel days, enjoyed many one-day rides and even a few adventure and dual-sport events. Am fortunate to have had good health this year- plenty of energy and no aches or pains- but know it won’t be that way forever. As the years continue to roll by, I’ll have to make adjustments and eventually retire from riding, something all of us will have to face.

One way to keep riding at an older age is to downsize to a lighter bike. My Yamaha FJR weighs about 650 pounds. The full body work can make a simple tip-over a traumatic and expensive event. Getting turned  around on a narrow country road requires care and strength, especially if there’s any loose gravel around. That’s the situation now. In the future, I may have no choice but to ride a smaller, lighter bike due to declining body strength and other health issues

It’s time to find out how well I can get along with a smaller, lighter bike, so last Fall I purchased a 2017 Suzuki 650 V-Strom XT. 2011-  (Suzuki also makes a 1000cc V-Strom, so the 650 is often referred to as the “Wee” Strom) It’s a versatile road bike that can do everything from long distance trips on highways to hilly, twisty back roads. I was already familiar with the V-Strom line, having ridden one about 1800 miles on a UK trip in 2016. The Wee weighs about 480 pounds and its two cylinders make about 72 HP, placing in right in the middle between the 140 HP FJR and my 315 pound, 40 HP, single cylinder Suzuki DRZ400 dual sport bike.

Even though the Wee is a lighter bike, the ergonomics are quite good for me- wheelbase, footpegs, handlebars, seat height etc, are very comparable to the way my FJR is set up. The 5.3 gallon tank provides a solid 200 mile range. The gearing and low vibration characteristics of the 90 degree V-twin motor offer plenty of acceleration and enough power to do long runs on the interstate.

OTOH, the Wee seat was only good for about 100 miles before pain set in. 2011-05.jpg Getting used to it extended the pain threshold to 200 miles,  but I was long since spoiled by the Russell Day-Long seat on the FJR. With it, there’s never any pain regardless, so I had a Russell Sport model seat made for the Wee. 2011-06.jpg The Sport model has slightly smaller support “wings” on the sides than the regular model and is a perfect match for the Wee’s other intended purpose, which I’ll talk about next.

Back when I was young I rode enduros and other off-road events, so I love exploring back roads, especially ones with gravel and dirt.  When I pass them on the FJR, I want to explore, but it’s not the right bike for the job. I still have the Suzuki DRZ400, which is great for that and much rougher stuff, but it’s uncomfortable and tedious to ride for any distance on pavement. There’s no way I would ride it a hundred miles or so on pavement with its full knobby tires and limited top speed.

Besides, the roads I currently want to explore are the nicer, improved dirt and gravel roads- no big ruts, piles of rocks, deep creek crossings, steep hills or mud. The Wee is a road bike, but has adequate suspension and ground clearance for riding on roads like these, and the larger 19 inch front wheel of my XT model rolls over rough stuff more easily than the 17 inch one found on most V Stroms.

The Wee is not a premium bike and its biggest weakness is the front suspension. The springs are too soft and damping is too stiff, so I installed a Cogent Dynamics spring and valving kit that improved it considerably. I also added a tank bag mount, GPS & phone mounts, heated grips, heated gear controller, taller windshield for cold weather, hand shields and a throttle lock. (Do miss the electronic cruise control like on the FJR though!)

I rode the Wee about 7000 miles this season, including a couple of rallies. (rode about 12000 on the FJR) It’s the ticket for poorly maintained county back roads, mild dirt and gravel. 2011-09

.jpg The Michelin Anakee Adventure tires do an adequate job loose surfaces while being excellent on pavement, so I can throw the Wee around with a bit more freedom than the FJR. Absolutely love the flexibility of the bike and will probably ride it even more next season!

Has the FJR’s day in the sun passed? Eventually it will be too big and heavy for me, but that’s a ways off. For now, if the rally destination roads are all pavement, a long haul, or weather could be dicey, I will be on the FJR. The electric adjustable windshield and fairing protect me better from rain and cold. Electronic cruise, smoothness and power make 500+ mile days easy. Superior brakes, suspension and good handling make it fun in the twisties despite the weight, and I can still ride the wheels off of it.

Having both of these excellent road bikes on hand now enables me to make a smooth transition in the future as needed.

Next month, we’ll explore another tool for extending your riding years in Part 2: Trailering to Events