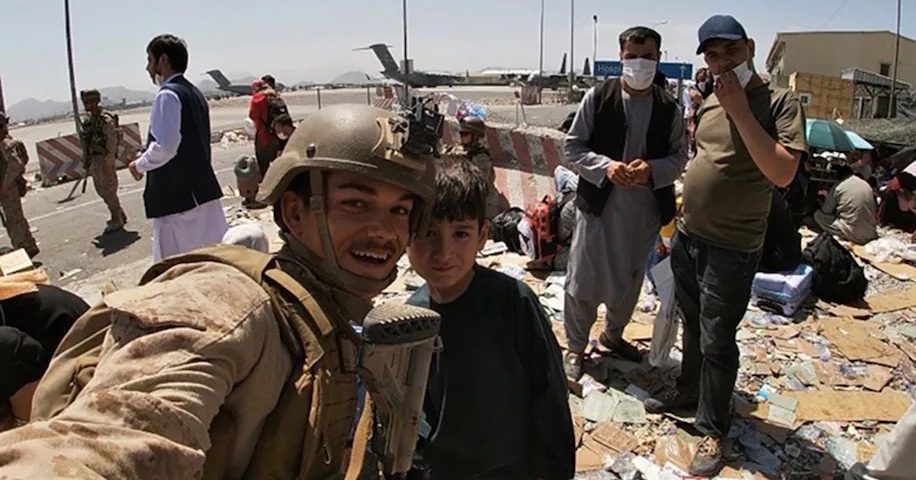 “Our flag does not fly because of the wind that moves it.  It flies with the last breath of each soldier who died protecting it”.  As Memorial Day approaches, this quote keeps popping into my mind more and more.  May 30, 2022 is the first Memorial Day since we lost the 13 in Kabul  on August 26, 2021.  Every time I see the American flag wave, I can’t help but think of these 13 heroes, most of them kids that we lost at Abbey Gate.

On April 20, I was lucky enough to spend a couple hours with Shana Chappell as she visited her son, Kareem’s, resting place.  Kareem Mae’lee Grant Nikoui is one of our 13 fallen heroes that we lost in Kabul.  Kareem was born in January of 2001, the year the war in Afghanistan started and he died the year the war in Afghanistan ended.  Kareem was in the 2 1 (2nd Battalion, 1st Marines), an infantry battalion.

Ever since Kareem was a toddler he wanted to join the Marines.  Possibly inspired by a Marine in his dress blues at the mall, Kareem thought it was so cool and from then on, he would pretend to be a Marine.  Thinking it was a phase, his mom got him into other activities: MMA, Jiu-Jitsu and boxing. He was a blue belt in Jiu Jitsu and competed in tournaments. In Jiu Jitsu, he earned the title of World Champion  and 4 time National Champion.  No matter how much he succeeded in other areas and activities, Kareem’s dream of being a Marine still held strong.  He would design video games with his characters being a Marine.  For his niece and nephew, he made little Marine cut outs and would design a little war base for them to play with. His dreams were always supported and encouraged which gave Kareem the incredible drive he had to fulfill and accomplish his goals.  Right when he turned 18, Kareem signed up for the Marines.  He had other options, opportunities and paths that he could have taken but this is what Kareem wanted to do with his life, he wanted to make it a career.

As Kareem was stationed at Camp Pendleton, he was able to go home to Norco(CA) on weekends.  Bringing his Marine friends with him on weekends, they thought they were in for a relaxing time.  But what Kareem thought was relaxing was different from what his friends thought.  Kareem loved hiking and being active.  He would have his friend hike the hills by his house and take them to the river bottom and have them go through the sand, they relaxed “his” way.

Kareem was a very funny and very caring young man.  He was the kind of person who helped without the need for recognition, he just simply was a good person.  After Kareem died, the stories of those he helped started being shared with his mom.  She received multiple emails from Marines that Kareem served with. They all shared a similar story: they were new and unfamiliar, Kareem would spot them and start talking to them.  The would ask them all the same question, “When you’re at home, what do you like to do?”  To Kareem, being at home was is safe place, the place where he could relax and that’s how he got these guys to feel less homesick.  They said they missed home but after talking with Kareem, they would feel better.  He didn’t allow anyone to get picked on, if he saw it happening he would walk over and walk those individuals away.  It seems no matter how long or how well people knew Kareem, they all remember their interactions with him.

Shana is fiercely proud of her son and is happy that he was able to do something that he loved.  Thank you Shana for sharing your time with your son with me. Thank you for letting us share his story.

I once heard that you die twice, once when you stop breathing and the second time is the last time someone mentions your name.  Please never let the these 13 heroes die again. Say their names.  Tell their stories. Honor our fallen.