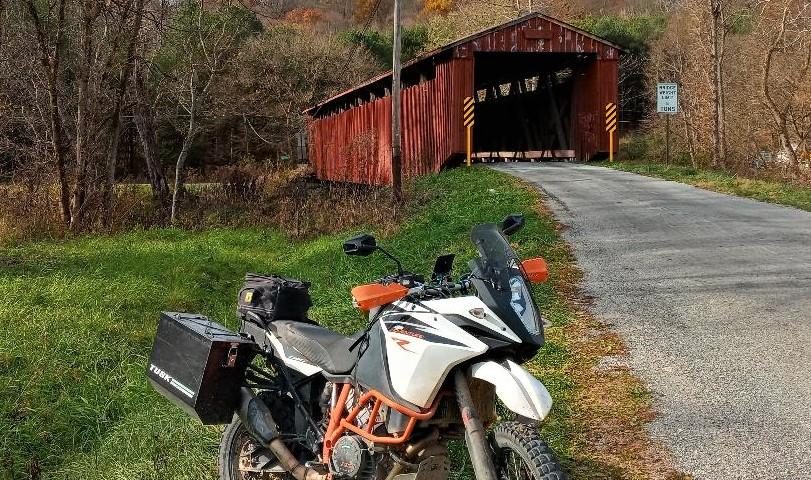 Every time I post a rides project on Facebook, responses come back from people telling about other routes in the area that might be of interest. This month we will look at a new Adventure route based on Morgan’s Raid of 1863, a Civil War incursion of the Confederate cavalry into Union states Kentucky, Indiana and Ohio. It is named for Confederate Commander John Hunt Morgan.

Covering over 1000 miles, the raid’s purpose was to draw Union troops away from the Vicksburg and Gettysburg fronts by frightening the North into demanding their troops return home. The raid ultimately failed, and the remainder of the command was forced to surrender in Northeast Ohio near the Pennsylvania border.

Fast forward to 2022, and Jim Miller, a motorcyclist from Belpre, Ohio, is in the process of finishing an adventure route that follows the original Morgan’s Raid path. I interviewed Jim recently and he has a great story to tell.

How did you get interested in Morgan’s Raid?
In about the fifth grade, there was a neighboring school named the “Morgan Raiders”, after the Civil War raid in 1863. That made me curious so I looked it up and did a report on it for history class. The more I learned about the story, the more it intrigued me. It’s so much more than just a confederate raid into the North- it includes all the local villages who rallied to defend their farms and towns, the logistics of the time, means of communication, and so much of it was just guess-work and luck.

The coolest part of the story is that it was just 150 years ago, so a person can still track down many of the buildings, creek crossings, skirmish sites, and visualize what occurred. Some of the farms mentioned along the way are still owned by the same families that owned them in 1863.

Where did you get the idea to make an adventure route of it?
Like many others, I got into adventure riding and moto camping to get my riding fix without having to commit to racing. I have ridden the Mid Atlantic Backcountry Discovery Route, parts of the Trans America Trail, parts of the Kentucky Adventure Tour, and the Smokey Mountain routes.

I like the idea of what Jeff Stoess is doing with the Kentucky Adventure Tour and trying to encourage tourism in some of the more out of the way rural places. There is no economic windfall to be had here for anyone, but hopefully it generates an appreciation of the roads less traveled.

How did you find the actual route?
The route turned out to be more of a challenge than just laying out a back roads moto route. There are a series of historical roadside markers that pay homage to the raid of 1863, so I knew I wanted to jump from marker to marker, while avoiding as many paved roads as possible.

There were three websites I relied on to locate the markers: The Historical Marker Database, Civil War Trails, and American Battlefield Trust. I used these sites to put together a map of markers, and then used Gaia GPS and other satellite maps to zero in on roads and connect the dots.

Once I had a general route, it all came down to verifying that the roads do exist, because back roads maps often have errors. Then I tried to locate campgrounds, hotels, gas stations, and other points of interest. I want to give a shout-out to Luke Biscan and Blake Wright down in Kentucky, as they made some great suggestions for the Burkesville area.

What is the current status of the project?
I still need to test ride a couple hundred miles in Indiana and Kentucky. Some revisions will be needed, and I know that once more eyes get on it, their local knowledge will improve it.

The route begins at the Cumberland River near Burkesville, Kentucky and winds its way North through Indiana, heads East through southern Ohio, and finally ends in northeast Ohio. I haven’t totaled the final length yet, but think it will be more than 1,200 miles.

Is this a full-on adventure route like a Backcountry Discovery Route (BDR)?
No. Because I focused on the historical markers and the story, I had to go where that led me. For instance, in West-Central Kentucky, I did find some gravel roads. Most roads are paved, however they are very remote, narrow, and twisty. In southwest Ohio, the route goes directly through the suburbs of Cincinnati, so you know that is not like most adventure routes.

Can I ride a street bike on this route?
All the roads are on legal, public roadways, but I wouldn’t recommend riding a street bike. There is plenty of pavement, but also dirt and lots of gravel.  When you get off pavement it can be rough for miles at a time. There is nothing too technical, but several stream crossings will present a significant challenge.

How can people access your work and support it?
Go to Facebook and join the Morgan’s Raid of 1863 – Adventure Route – Kentucky Indiana Ohio Group at
https://www.facebook.com/groups/694392778189363
In the Files section, you will find links to download six GPX files that not only contain tracks, but over 350 waypoint locations of historical markers and points of interest that tell the story.  If you ride the route, report back any issues like road closings, or traffic pattern changes. Look at the map of the overall route and start with the part nearest you to try it out.

Connect with local Ohio MSTA riders at these monthly breakfasts:

Southwest Ohio Breakfast, 9AM May 21

Central Ohio Breakfast Meet – Sunday June 5 . Arrive at 8 am to eat, 9 to ride if weather permits.