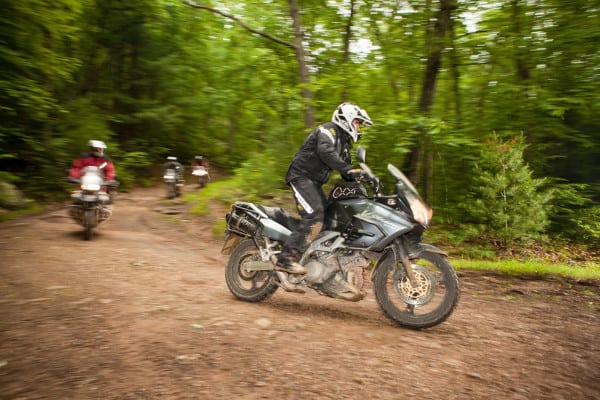 I got a text from a buddy the other day, “Should I buy heated grips or heated gloves?”

I thought about it for a moment and replied, “Well… it depends…”

While not quite as hotly debated as the best oil or tires for your bike, there are certainly folks with strong opinions on this matter; I’m certainly not innocent. Since Old Man Winter has felt it necessary to hang around so long this year, I figured it was worth diving into the details on how to keep your paws warm when the mercury dips below 50°F.  Every motorcycle I’ve owned has had heated grips installed. I also own a pair of heated gloves, so I feel comfortable making an argument for purchasing either one, or both for that matter. Like so many things in motorcycling, it’s really about what machine you’re riding, and how you like to ride it.

The fever of “ride all the time” started to set in not long after bringing home my Triumph Speedmaster. I too, asked around to my riding friends what I should buy to keep my hands from freezing, no different than what was recently asked of me. For Christmas that year, my brother-in-law gifted me a set of aftermarket heated grips. I was riding about half an hour to work at the time, needless to say, it was a pretty life-changing experience. Those heated grips retailed for about fifty bucks and having now installed heated grips on three different bikes, I feel safe saying, the install is mostly painless (wiring under the tank can be a pain sometimes), and that the “bang for buck” factor is pretty high. For those that don’t know, most heated grips replace your factory grips, and include small heating elements that run off the battery. Installation means removing the factory grips, pushing on the new set, mounting the “controller”, managing some wire routing, and connecting to either the battery or a factory accessory plug. There is a myriad of options available, including non-permanent models that actually go over your factory grips (so you can remove them during the summer); prices range from as cheap as $50, to upwards of $300 for OEM (Original Equipment Manufacturer) grips. I’ve spent just under $100 each for the last two sets I’ve bought, and in the end, they’re comparable in price to premium winter riding gloves.

A set of heated grips made the morning commute more comfortable, until the point where the temperature started hovering at or below freezing. At that point, the backs of my hands were still really cold, and after almost half an hour in the air, the tips of my fingers were getting numb. I bit the bullet and spent $200 on a set of name brand heated gloves. Again, for folks that don’t know, heated gloves are not all that different than heated grips; the gloves, however, have heating elements on the backside of the hands and fingers. You run the connecting cables through your jacket to a controller that you can put in your pocket and again plug into the battery or accessory terminal. The price of entry was pretty high, but after rolling into work on twenty-something-degree mornings with grips and gloves running, my hands were again warm and toasty.

How do you choose?

Each system has its advantages, and while I adopted heated gear in a progressive fashion, there’s logic to purchasing gloves before or in lieu of grips. Having bought three sets, it’s obvious I have a bit of a preference toward heated grips. I personally find that heated grips offer more flexibility than heated gloves, and the cost of entry is usually lower. Installation, however, may be a bit intimidating for the less kinesthetically inclined among us. However, if you’re comfortable managing the wire routing and so on, the grips are now on the bike all year long and you don’t have to fuss with wires and plugs every time you get on the bike. What I find I like most about heated grips is when that first cold evening hits every fall, I can keep wearing my summer gloves, and just bump the grips up to level 2 and enjoy the ride without needing to stop and put on thicker gloves.

On the flip side, if you have multiple bikes, having heated gloves means that you don’t need to install multiple sets of grips, and you can put the same gear on every morning and take whichever bike strikes your fancy. You can also make an argument that your hands are “warmer” since the heated gear forms a barrier between the cold air blast and your skin; most importantly, it’s the side of the glove that’s actually in contact with the wind, unlike grips. I have a set of traditional heated gloves that “plug in” so that I have unlimited energy to keep the gloves warm, however in recent years battery operated heated gloves have become a thing. My argument about fussing with cables and so on is a moot point when you can just grab your gloves and go; these new gloves are invaluable for the daily commuter. That said, if you forget to charge those gloves, or decide to go on an all-day adventure, that convenience can rapidly become a liability depending on the weather.

A little over a year ago I was in the hunt for riding the motorcycle every day for a full year. As fall settled in and I was staring down the impending winter months, I was again searching for a way to keep my hands warm. Grips and gloves were obviously great, but when things dipped into the teens, they were still not enough to keep warm for any extended rides. I had buddies tell me I needed a set of “Hippo Hands”. I had fabricated and purchased “brush guards” for both of my bikes in the past, but those only bought me about an extra two degrees of comfort. If I was going to make a successful run on winter riding in January, I knew it was time to open my wallet and make an investment. I admit, I really wanted a set of brand name “Hippo Hands”, but I wasn’t in a position to pull the trigger on a set at the time, fortunately there were other, more affordable, hand mitt suppliers out there (while not as extensive as gloves, hand mitts can also be found in varying degrees of price, features, and quality). With a giant set of over-the-handlebar “mittens”, I charged into winter last year, again, asking myself why I didn’t try them sooner. In late December I was logging my daily mileage with my heated grips on, yet wearing summer gloves and still warm and toasty despite below-freezing temperatures. Those mitts made riding in single-digits possible in January but were a real life saver later in March when I left Dayton bound March Moto Madness in Tellico Plains, Tennessee. Two hours in, I had been riding well below freezing with my heated grips, vest, and gloves all on full blast when I stopped in Kentucky for gas. If not for those hand mitts, it would have taken all day to get to Tellico Plains, if at all.

Debating heated grips versus heated gloves is like arguing about using a GPS, cell phone, or paper map to navigate; it’s simply a matter a taste and function. I can’t say it enough, once you’ve dropped the money on either (or all three) of these options, you’ll immediately ask yourself why you didn’t spend the money sooner. I find I’m often among the thriftiest in my riding circle, but when the difference between riding in comfort, or not riding at all is about $100, I’m going to spend the money, and squeeze a few extra days into the riding season. All the extra “clutter” isn’t for everyone, but for those interested, you might be surprised by the difference it makes.